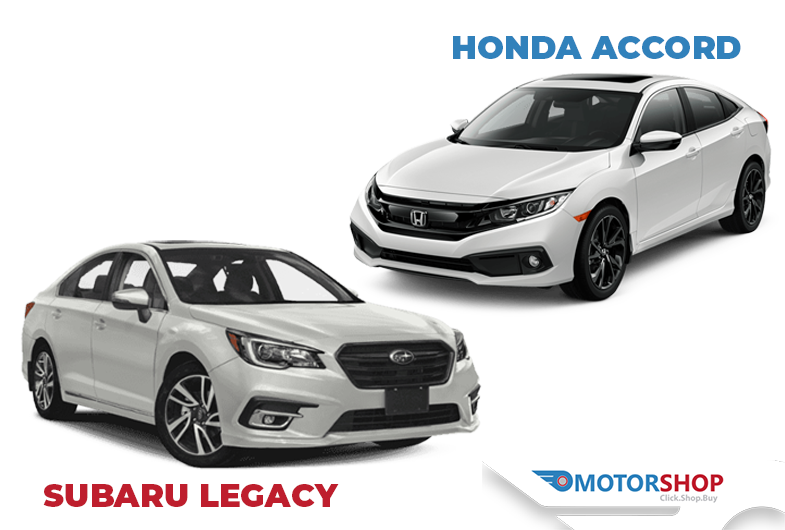 The Honda Accord and the Subaru Legacy are Japanese made automobiles manufactured by the Honda and Subaru automakers respectively. The cars are similar in terms of their body conformation whereby they poses a four door sedan body style, nevertheless they also fall into the mid-size car class also known as the compact car during the early stages of automobile revolution. Both of the automobiles got a lot to offer to different car audiences despite some minor similarities. These cars offer the best combination of quality and value in its own class.

Both of the cars being sedan sized in terms of their dimensions, they got little to differ on as far as the interior standard view is concerned.  They both accommodate five people on two spacious rows of cushioned, cosy and supportive seats. The seating position of the Accord seats are however positioned too low compared to the Subaru. For both cars cloth upholstery is standard and mossy. Their cabins are also well constructed. The cargo space differs since the legacy has a 15 cubic feet of trunk space whereas the accord has an above average capacity of 16.7 cubic feet which Is slightly higher. However, both of these cars have smaller trunk openings making it difficult to load larger items into the cargo space. The infotainment system for both cars is similar comprising of a HD radio system, android auto, navigation, a classy audio system, standard traffic recognition and dual USB ports. Both cars make a great fit for families, families with high cargo amount would prefer the accord to the legacy despite the minor cargo space difference.

The legacy has an AWD drive train whereas the Accord has an AFW. Both cars come with a continuously variable automatic transmission that provides quick throttles. The Accord possesses a 1.5 litre engine which is a bit lower than the Legacy which takes a 2.5 litre engine. The Accord Accord’s base engine is turbo charged having a 192 horsepower for the latest models, the legacy has a lower horsepower compared to the accord having a 175 h.p. The legacy’s four cylinder engine doesn’t have a lot of power compared to the Accord’s, this provides a sluggish acceleration. Both cars are terrific but speedy car lovers would prefer the Accord to the legacy thanks to its turbocharger. Both cars have agile handling and smooth rides but the legacy is a bit more fun to drive. Driving enthusiasts will appreciate it for its quiet ride unlike the Accord.

Despite not having a hybrid option available like the accord, the Subaru legacy keeps pace with its fuel economy. The 2.5 litre engine gets a respectable 29 combined mpg (miles per gallon). The Accord hybrid on the other side is rated at 48mpg (miles per gallon) combined. Thereby the Honda Accord is more fuel efficient than the Subaru Legacy. Cost saving individuals would prefer the Accord to the Legacy. In addition to cost saving there are intangible benefits that many people value such as reduced oils use and fewer tailpipe emissions: engines that burn less diesel per mile (Accord) tend to stay cleaner than their thirstier counter parts (Legacy) .A used Subaru legacy ranges its price from about 1.2 M ksh to 1.5 M ksh whereas the Accord’s value ranges between 1M ksh to 1.3 M ksh, this depends on the trusted automobile dealer and it’s the year of production.

From the analysis above it is therefore crystal clear that the two automobiles despite their similarity in the body conformation they perform differently and therefor attract different types of car buyers. The choice depends on your interest and preferences.