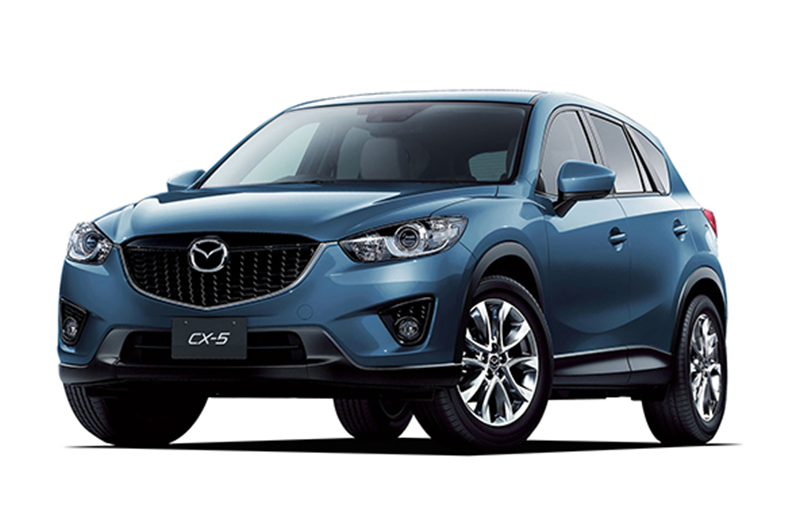 The word "car" has long been considered a synonym for the more generic "vehicle." Nobody goes "SUV shopping"; they go car shopping. And what people are shopping for today, increasingly, is compact SUVs, such as the Mazda CX-5and the Toyota RAV4.

From Honda to Volkswagen, tall compact hatchbacked SUV-like vehicles often are a brand's best seller. Here we have two superlative best sellers: The Toyota RAV4 is not only Toyota's biggest seller, it's the best-selling vehicle in the whole class.

Our all-wheel-drive CX-5 test vehicle is the Signature version, on which there are no options. It already includes Mazda's new G-Vectoring Control Plus, nappa leather, heated and ventilated front seats and heated rears, keyless entry and start, a sunroof, dual-zone climate control, adaptive cruise control, a 360-degree camera, navigation, and a full complement of active-safety equipment. The CX-5's upgrade engine, a turbocharged 2.5-liter inline-four producing 250 horsepower and 310 lb-ft of torque, is standard on Grand Touring Reserve and Signature models, while lesser trims get by with a 186-hp naturally aspirated 2.5-liter for its latest version.

With the latest version of Rav4, it’s four-cylinder engine also displaces 2.5 liters but doesn't have a turbocharger. At 203 horsepower and 184 lb-ft, it's well behind the Mazda, but an eight-speed automatic helps make the most of the comparatively meager output. Of greater importance to buyers in this class is that the RAV4 matches the CX-5's luxury-feature content line by line and adds wireless phone charging and foot activation for the power rear hatch. While Toyota does offer Apple CarPlay, the Mazda also is compatible with Android Auto.

The CX-5 is our gold standard for compact SUVs. It's such a standout that, if we want to praise any other similar vehicle, we compare it to the Mazda. And this excellence is apparent from the moment a driver pulls onto the road. The CX-5 has great, rock-solid steering that, in a straight line, feels as though the wheel is fixed. Then you start to turn the wheel, and there's a satisfying buildup in effort. The CX-5 has real body control that doesn't feel as if it was designed to manage more than a driver in this segment is going to do with the Mazda but was designed to deliver outstanding ride comfort no matter what.

It's surprising for a Toyota, and especially so for a RAV4, how connected and communicative the RAV4's steering is. And the vehicle as a whole is pretty well balanced and planted. Before you get any warning light or big interruptions, you can feel the stability control intervening in subtle ways to keep the thing neutral and controlled around corners. The CX-5's is a little squishy at the top of its travel, while the Toyota's is part of the brand's unexpected commitment to verve in its pedestrian products.

It's easy to see that Toyota's budget for the RAV4 went straight to its design. Inside and out, this SUV is very distinct. From the quasi-4Runner front end to the big bulky forms and harsh angles inside, all the lines are rendered nicely, even if the end result is a little polarizing. The front and rear seating areas are huge, and the cushy seats are recliner comfortable. Behind the rear seat lives one of the largest cargo holds in the class at 37 cubic feet. But it's a noisy environment. There's a ton of wind and tire noise, and a particularly egregious racket works its way in from the engine bay. The RAV4's sound-level readings of 76 decibels at full throttle and 70 decibels at a 70-mph cruise both are 3 decibels louder than the CX-5's. Toyota's 2.5 is so obtrusive that one driver claimed he could feel the engine noise through the steering wheel. Another called the transmission's shift quality "chunky." The RAV4 is lighter than many competitors, so it seems like Toyota could afford to pack a few additional pounds of sound deadening around the body shell without going over weight.